The Chair, First Bank of Nigeria, Ibukun Awosika and other leading African women have come together to lend their support to the candidacy of Dr Ngozi Okonjo-Iweala, Nigeria’s candidate for the position of Director-General of the World Trade Organisation (WTO).

Ngozi Okonjo-Iweala, who is also Africa’s candidate for the position, is one of the two remaining candidates in the final lap of the race. Her challenger is South Korea’s Yoo Myung-hee.

These powerful women, in a statement titled, “A call to Elevate Africa’s Voice on the Global Stage” told the member states of WTO to elect Mrs Okonjo-Iweala as its first female head because she is the best candidate for the job.

In their words, “As African women in the business community, we stand behind Dr Ngozi Okojo-Iweala in her bid to become Director-General of the World Trade Organisation (WTO).”

“As the world becomes more protectionist, Africa is showing its commitment to using trade to accelerate development. Regional trade agreements like the African Continental Free Trade Agreement (AfCFTA) are modern and at the cutting-edge, but WTO rules have fallen behind. Under her tenure, Okonjo-Iweala will ensure that the rules take into account rapidly growing areas like the digital economy and services trade.

To further drive home their point, the group moots that appointing the former World Bank’s managing director will help the WTO arrest its decline in recent years occasioned by US-China rivalry. They also believe that an Okonjo-Iweala DGship will help Africa to catch up with and maximize key regional trade landmarks like the African Continental Free Trade Agreement (AfCFTA) in the interest of the continent.

“We urge the WTO member states to recognise Okonjo-Iweala as the best candidate for director-general not only because of her vast experience leading national and multilateral agencies and initiatives but also because of her vision,” they conclude.

The women submit that Okonjo-Iweala’s victory would be a win-win for Africa and the world both in terms of expected substantial accomplishments and powerful positive symbolism. 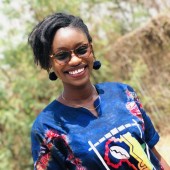 Woman Kicked Off Emirates Flight After Complaining About Period Pain